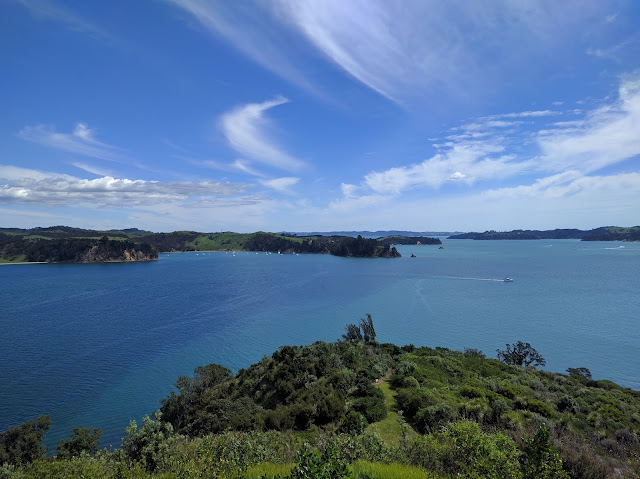 Summary: Feeling the need to get away from the hustle and bustle of the city life? Rotoroa Island is a small island that is just over an hour's ferry ride away from the Auckland CBD, and is a perfect getaway offering picturesque beaches, walking trails and native animals.

The island is less popular compared to it's cousin and as such in a lot of cases it feels like you are in your own beautiful private island in the middle of nowhere.

Play the video above to get a preview of the island

Getting there: 75 minute ferry ride from Auckland's Ferry Terminal. A morning ferry drops passengers off and picks them up at the end of the day.

Time: 3 -5 hours worth of walking tracks + a few hours of lazing/swimming in the beaches.

Facilities: Toilet, barbecue, drinking water and mobile phone coverage are available. However you must bring your own food supplies as there are no shops in the island.

The Route: Download my route to your ViewFinder app  (iOS/Android) or view an image of the official map. 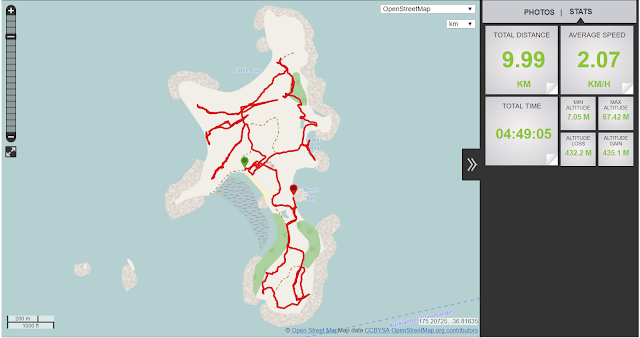 View my recorded trail at ViewFinder

Upon disembarkation of the ferry, the staff will provide all passengers with a short induction (things you need to take note of to protect the native animals in the island, as well as recommendations on where to go).

As the island is a pest free, the staff are relying on the assistance of the visitors to keep it that way, which means keeping checking the bag for pests, keeping food inside sealed containers as well as bringing rubbish back home.

After the induction, you can get a copy of the map in the exhibition centre (which shows walking times on various tracks), as well as top up your drinking bottle if required. 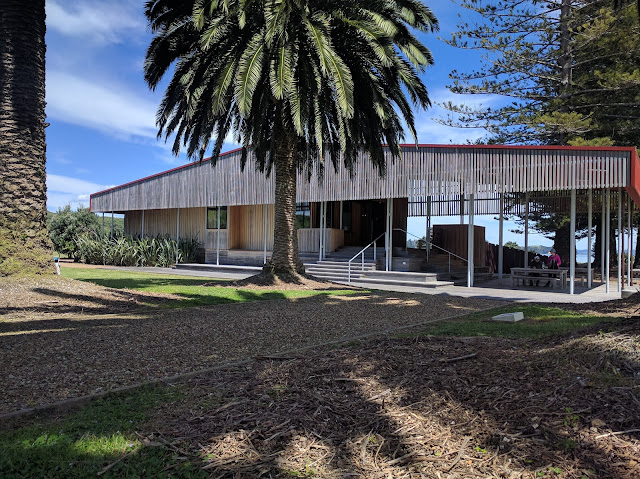 The first stop is the Ladies Bay which is the best equipped of all the beaches in the island as it has it's own toilet, barbecue and large space for you to spread out and relax. At about 11:30am, there was already someone cooking something on the barbecue... makes me wish that I had brought something to cook. 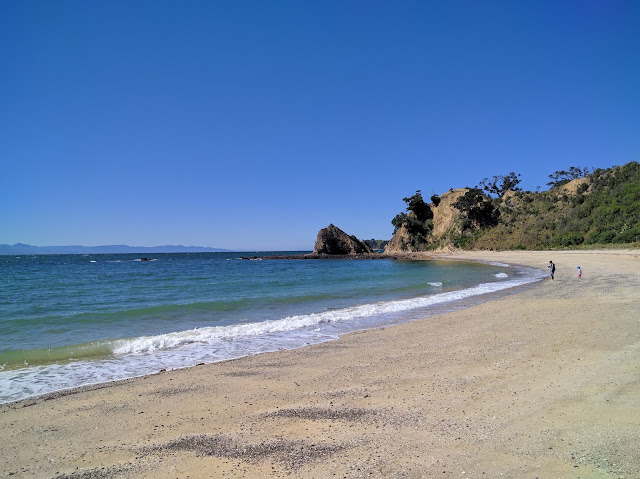 A short walk away from Ladies Bay is the cemetery which offers a nice elevated view of Ladies Bay. Continuing the climb up to the North Tower I was rewarded with one of the most stunning sceneries I've seen in my travels with a panoramic view overlooking the island and the Auckland Harbour (this view was only matched by the views from the South Tower).

With views like this I wonder why this island is not as well known as it's cousins Waiheke Island and Rangitoto Island. Although in a way, I like it this way as it would be a pity to have the serenity and secluded nature of the island ruined by mass tourism. 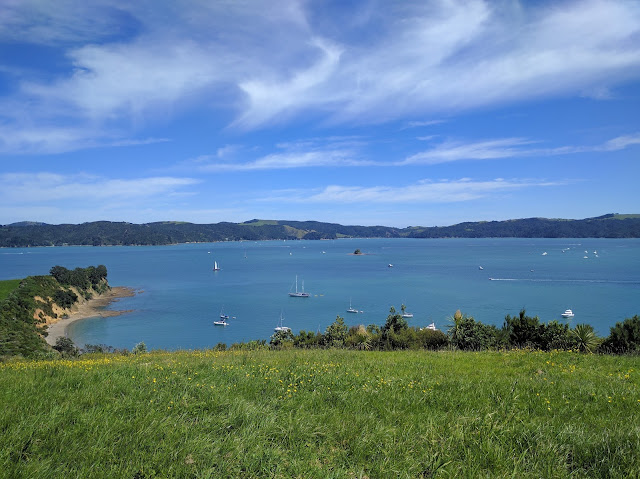 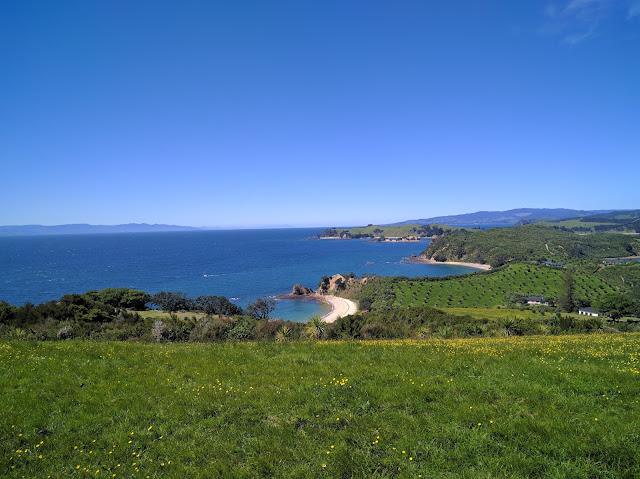 The walk towards Cable Bay beach has a relatively steep decline in grassy terrain and on my way down I saw a group of people going up the other way. That made me so glad that I wasn't going up that hill.

Towards the bottom of the hill I could start to see Cable Bay beach, and whilst the beach was nice, I felt Ladies Bay was nicer. There were quite a few boats parked near this beach but there wasn't a soul in sight here on the beach. 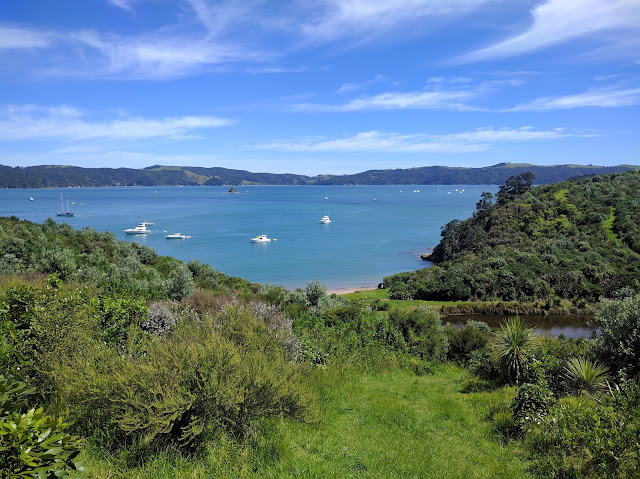 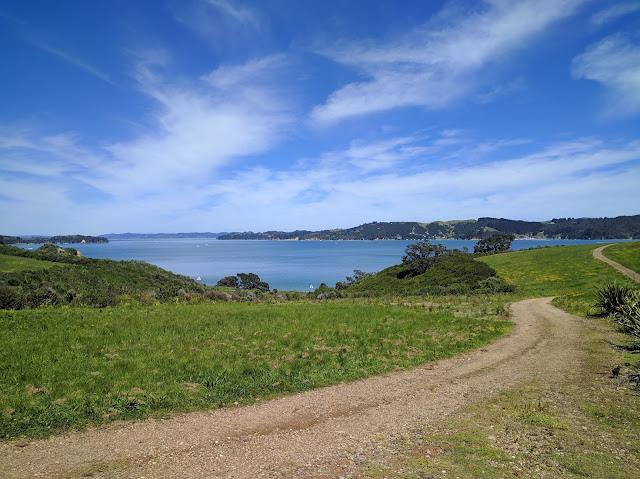 I ended up taking the wrong turn on the way there where the road turned out to be a dead end, but the views from there made the "detour" worth it. 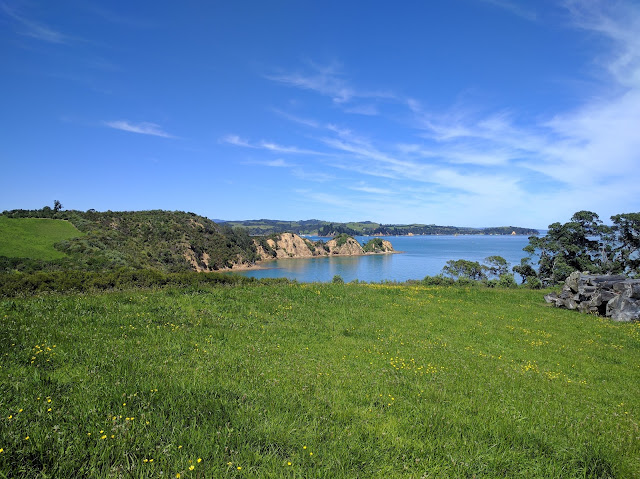 Arriving at Mai Mai bay, I decided to take a break and have lunch there. I can't believe that I have such a beautiful beach to myself. 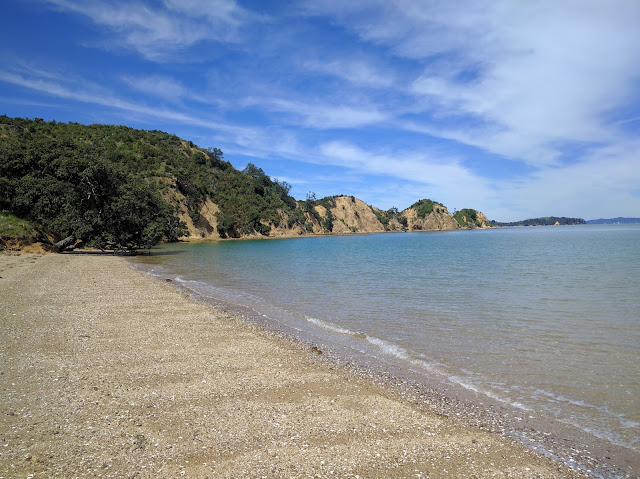 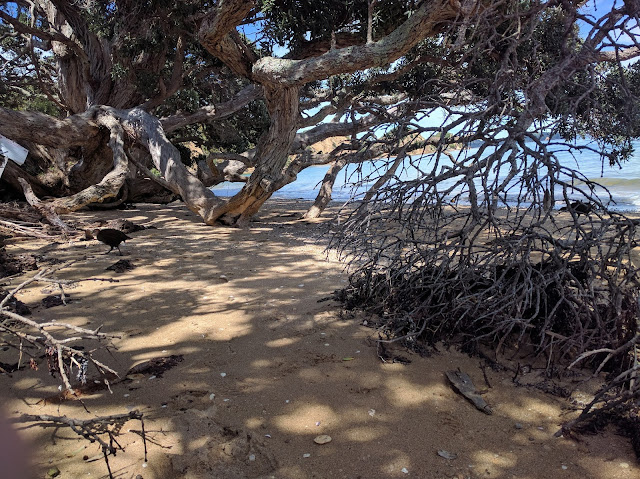 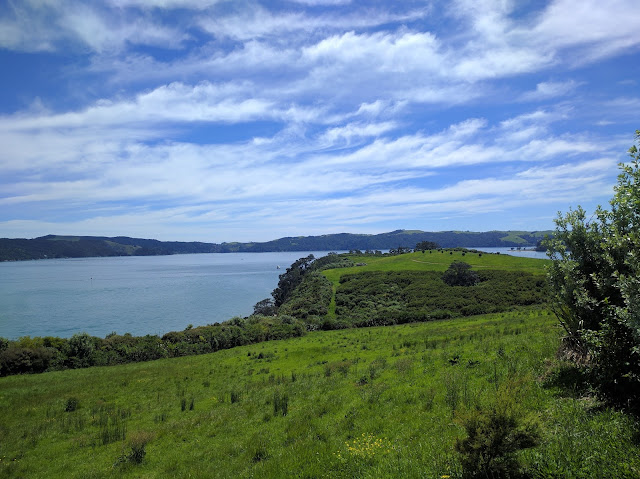 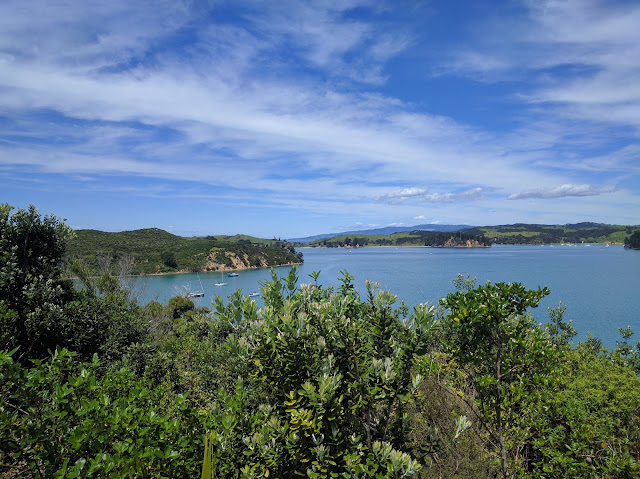 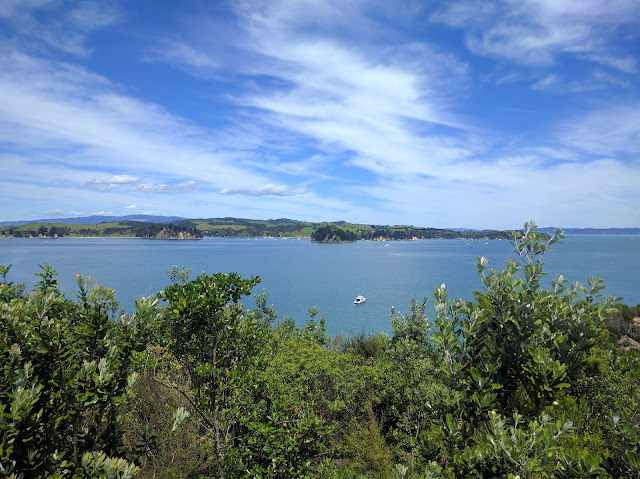 With the sun beating down at mid-day and very little tree cover on the walking tracks, I decided to return to the exhibition centre to relax and lie down in the park. Waiting it out until about 2 pm where the sun was less strong. 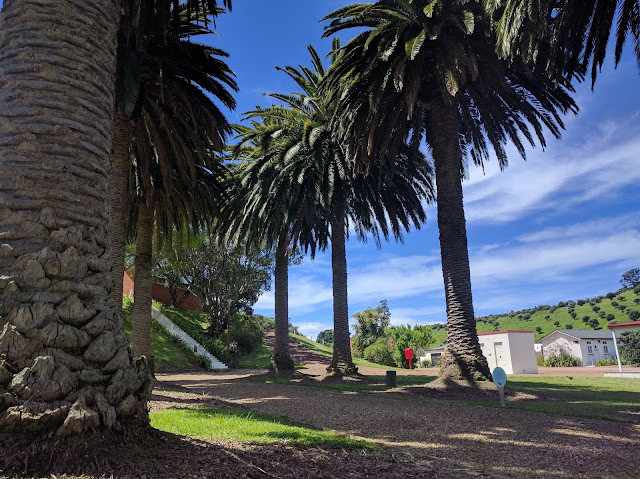 Having explored the northern part of the island, my first stop in the southern part of the island is Men's Bay via the Southern Loop Track. This ended up being my favourite beach as the views very nice here, and whilst being smaller and not well equipped as Ladie's Bay it did not feel as small and isolated as Cable Bay and Mai Mai Bay beaches. 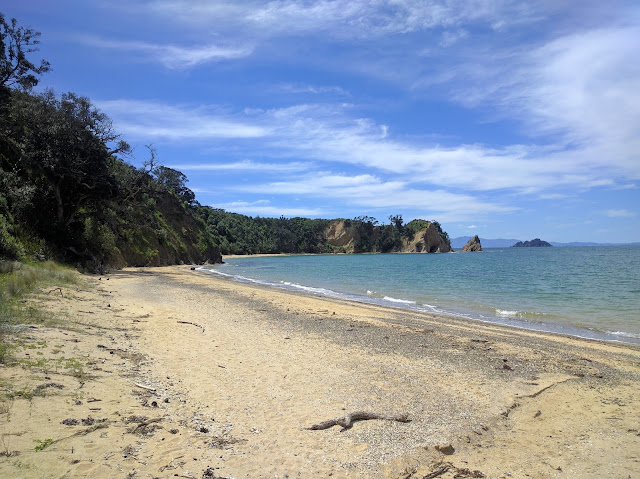 Next up I made my way towards the South Tower and Chris Booth Sculpture and was again rewarded with stunning panoramic views. 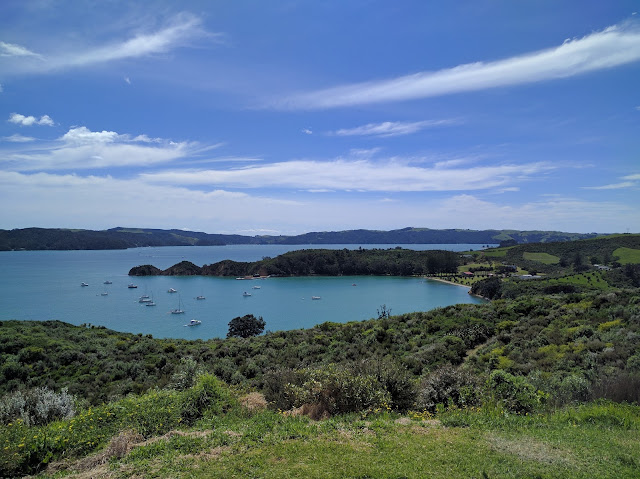 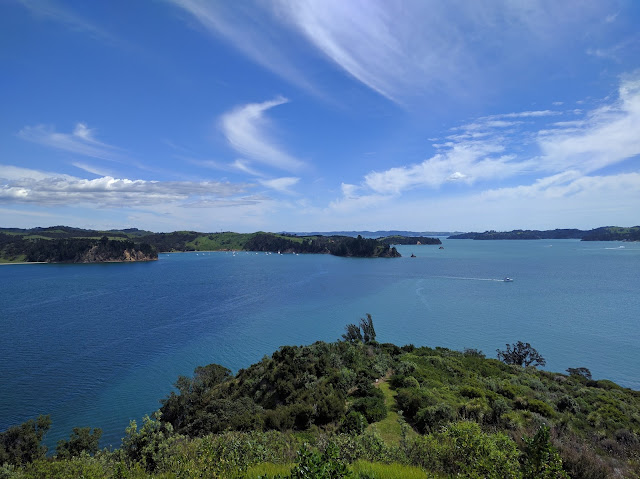 I made my way back to Men's Bay Beach via the loop track to relax until the ferry comes to the island at 5 pm.

Whilst waiting for the ferry I dropped by the exhibition centre to have a quick look at some of the exhibits about the history of the island. Whilst the exhibit was small the information came in varied forms (text, image, audio and videos) and provides an interesting background into the island.

Overall I'd have to say that this is my new favorite place in Auckland, and the sceneries in this island rival the best I've seen from overseas or other parts of New Zealand.

Of course being able to visit the island wouldn't be possible without the generosity of Neal and Annette Plowman who have leased the island from Salvation Army and made it open to the public for visits. 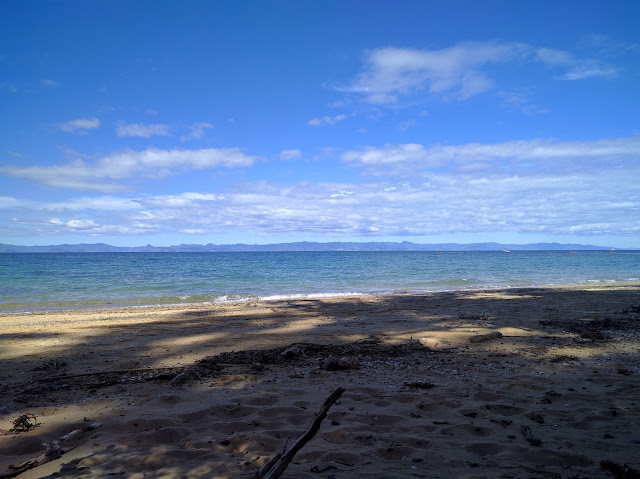 Have you visited the Rotoroa Island before and have other recommendations on things to do here? Leave your comments below...

November 27, 2016
The Problem What if we need to create a form that changes it's behaviour based on the answer entered by the user. For example, we need to build a leave request form that: Shows the comment field if applying for a sick leave, but hides the comment field if applying for a annual leave Requires the requestor to write a comment if their sick leave is more than 1 day, but is optional if sick for just 1 day.  The default form interface for custom lists in SharePoint Online can be used for basic scenarios, but doesn't provide an easy way to add business logic described above ( unless you want to write some javascript ) In the past InfoPath would have been the tool of choice for many, however this tool is now in maintenance mode and whilst it will still be supported for a wee while  there will be no improvements or enhancements to the platform. The Solution This is where PowerApps come in. PowerApps is now the platform that is recommended by Microsoft as a way fo
Read more