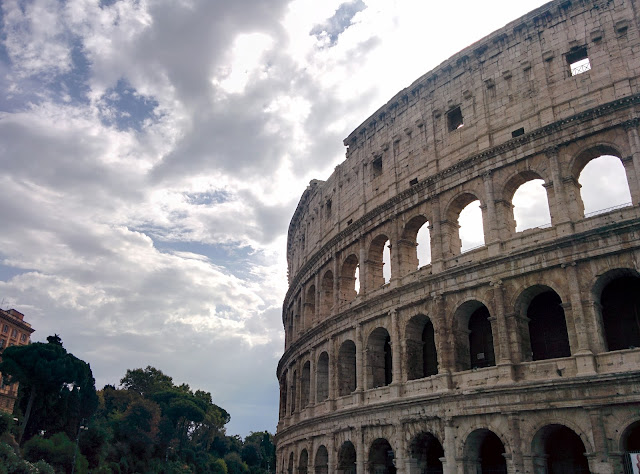 Having had a chance to relax and chill out in Switzerland, I'm now looking forward to exploring Rome. It's hard to believe that I'll finally have the chance to visit this city after reading about the legendary roman empire in comics and books.

I woke up early today and walked towards my first stop the Colosseum. The walk itself didn't take long and was an easy half an hour walk from the Dreaming Rome Hostel. Upon arriving at the Colosseum, I was able to use my Roma Pass to skip the ticket line after passing through the security checkpoint.

Speaking of the Roma Pass, this pass is highly recommended when you are in Rome as it allows you to not only get unlimited transportation for 3 days, but also free entry into two sights. The best thing is that the Colosseum, Roman Forum and Palatine Hill can be considered as a one sight combo. 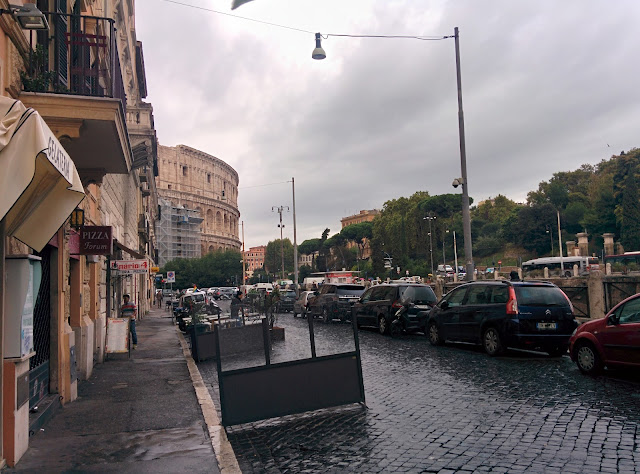 Although the interior of the Colosseum has largely deteriorated, it is still amazing how well it has been preserved through hundreds of years and just how little has changed between how people then and now enjoyed "sports".

If you are not joining a guided tour, I highly recommend installing the Rick Steve's app and downloading the audio tour for the Colosseum as it helps provide a context into the history of the building. 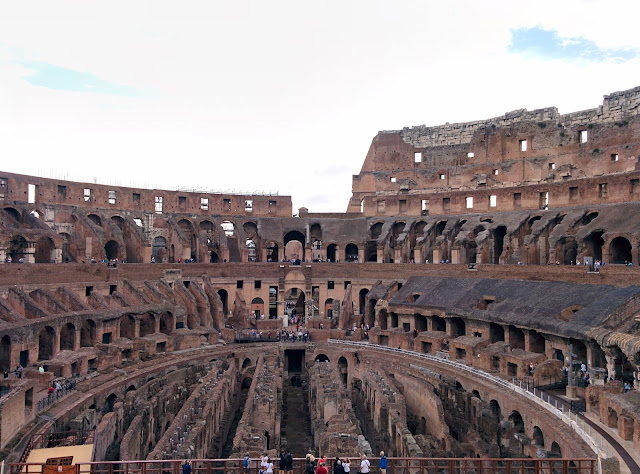 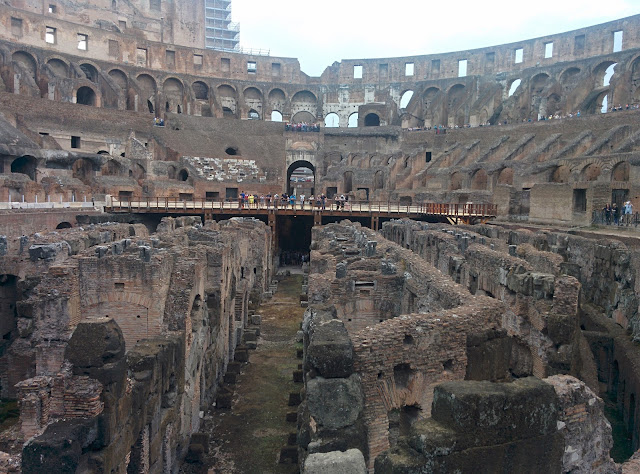 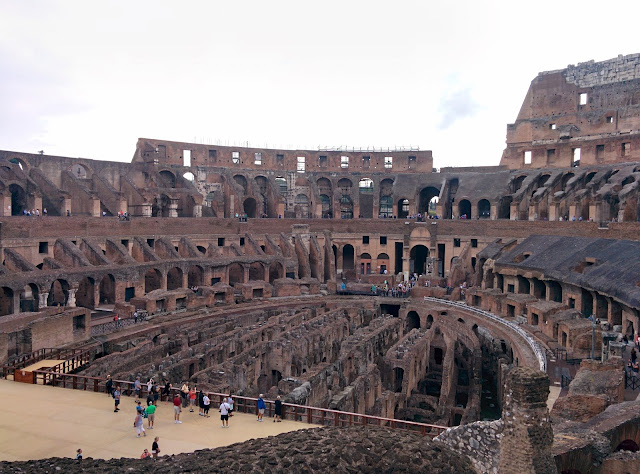 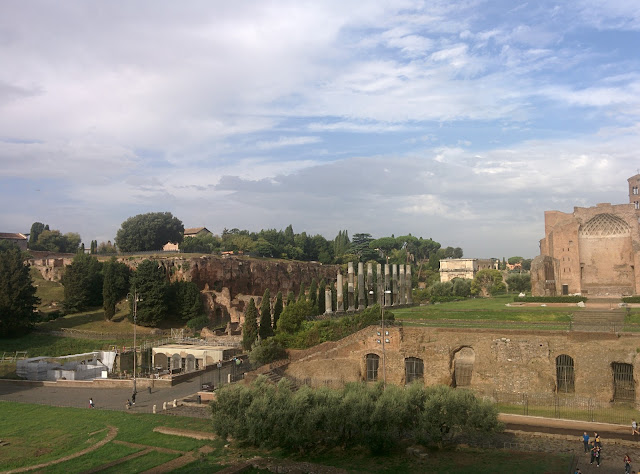 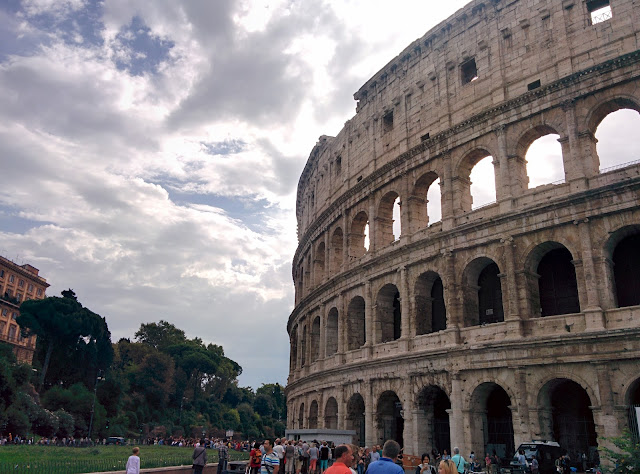 The Roman Forum and Palatine Hill

After exiting the Colosseum, I made the short walk towards the Roman Forum and explored he Forum and Palatine Hill. Again, I would recommend installing the Rick Steve's App and downloading the audio tour. This audio tour is even more useful in the Roman forum as it really helps you appreciate the significance around you.

It's hard to believe that this used to be the center of Roman life and that the great Julius Caesar once walked the same paths and walkways as I am walking now. Listening to the audio tour, I can just about imagine what life would have been like in the days of ancient Rome. This is especially the case after being an avid reader of the Asterix comic book series.

Walking around the Roman Streets

After spending three to four hours in the Colosseum and Roman Forum, I spent the afternoon exploring the streets of Rome. Although I had unlimited transportation included with my Roma Pass, I preferred to walk everywhere.

Before having a late lunch, I visited the Pantheon (free entry but very crowded when I went so try to visit early morning if you don't want the crowds), the interior of the temple is just an amazing work of engineering. You really have to wonder how they managed to build such a symmetrical dome with the technology that they had then.


Having spent much of the day walking around, I was ready to tuck into some pasta or pizza (two of my favorite foods). Even though Italy was one part of the trip where I wanted to spend more on food, I still couldn't afford to eat in expensive restaurants so opted for Antico Forno Roscioli Restaurant which provides hot and freshly cooked pizza among other delicious foods (It's like a bakery that sells hot pizza over the counter, so you can choose the flavor/size of your pizza, pay at the cashier, and then tuck in to it straight away). 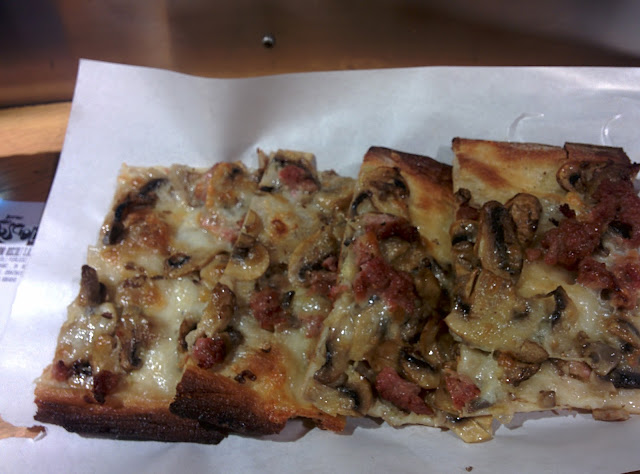 Not only was the pizza very delicious, it also wasn't expensive (highly recommended especially for those on a budget), so I washed the lunch done with some nice chocolate ice cream from FLOR close to Piazza Campo Dè Fiori.

As I explored the streets of Rome, I couldn't help myself when I noticed a large sign outside Caffe Degli Angeli Restaurant claiming to have the "Best Tiramisu in the World". Tiramisu being my favorite cake, how could I say no to that :). The cake itself was quite good and at a reasonable price, but I can't exactly say that it blew me away.

Having just stuffed myself with some of the foods I really wanted to eat when I planned this trip, I continued walking the streets of Rome and the Trevi Fountain was my next destination. 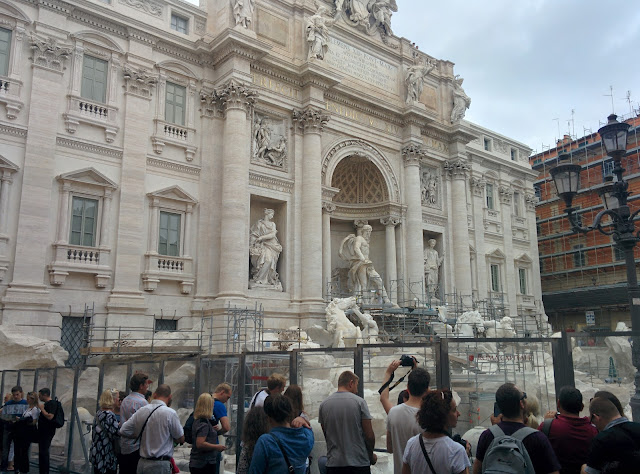 Arriving at the Trevi fountain, I was disappointed to find that it was closed for maintenance.... 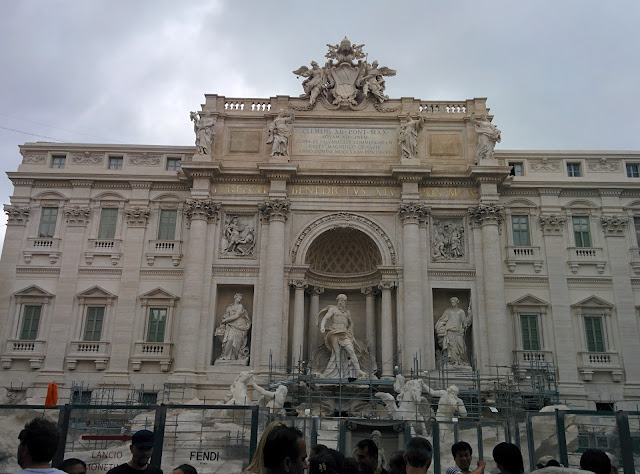 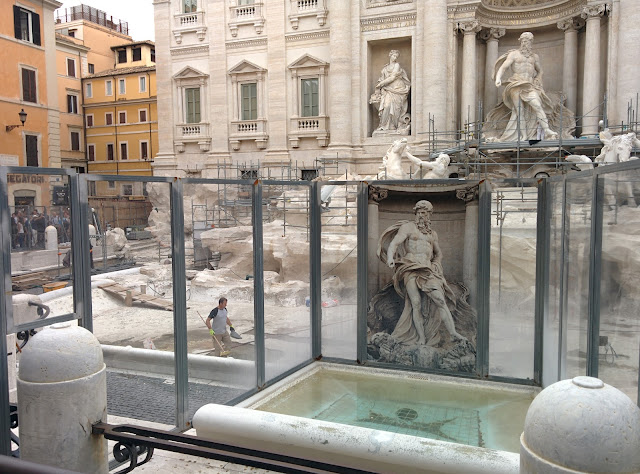 ...but luckily if you wanted to throw a coin over your shoulder in the belief that it will bring you back to Rome for another visit, you can still do so in a small area at the front of the Trevi Fountain.

In the late afternoon, I visited the what is considered to be one of the main shopping areas in Rome. The Dolce Vita Stroll generally occurs between 5pm and 7pm, and during this time locals and tourists alike take the opportunity to take an evening stroll (and window shop among many well known fashion brands) from Piazza del Popolo to the Spanish Steps. 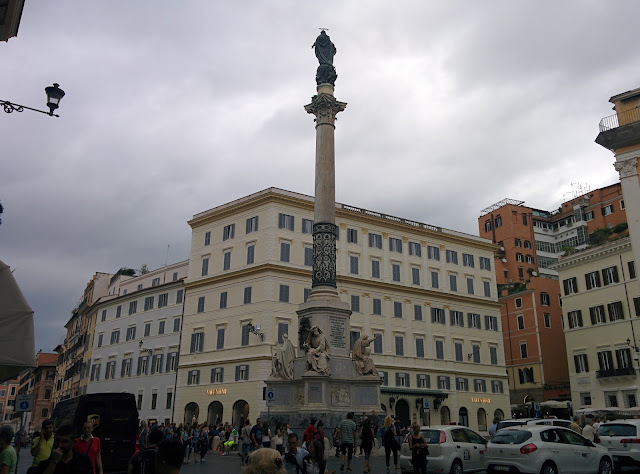 Roaming the streets of Rome at night

Similar to Paris, Rome is a city that comes alive at night. Everything just seems to come alight as the sun sets and the floodlights turns on and provide a magical glow across the city.

One of the things that sets Rome apart is that there it is a relatively flat city and there isn't much of a chance to get on a vantage point to get a view of the city. Piazza Del Campigdolio provides a bit of that as climbing the stairs provides some great views of Ancient Rome and is especially awesome at sunset.

As the sun set and flood lights came on I took a detour around the streets of Rome I walked through the highlights from my day to experience what they are like during the evening. It seems like everything just comes alive at night with restaurants bustling at almost every street as locals and tourists alike enjoy a fine Italian meal.


I finished off the evening by grabbing a snack at the McDonald's near the Spanish Steps before taking the tube back to the Dreaming Rome hostel.