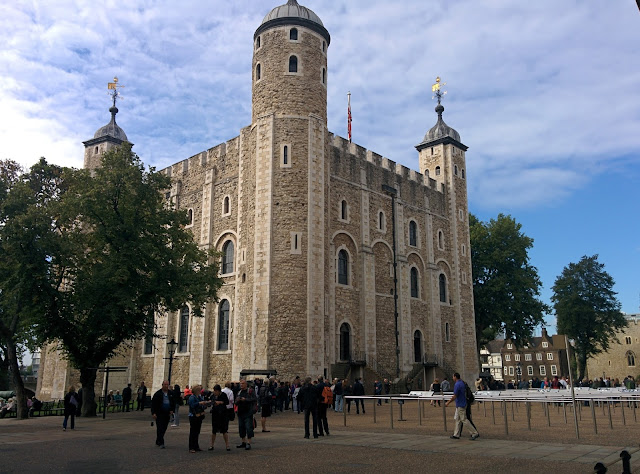 Today's my 1st full day and also my last day in London, so I woke up early to catch the Big Bus (a hop on, hop off tour bus service that includes a thames river cruise) to the Tower of London. As I walked towards Green Park Underground, which is the first stop of the Big Bus tour, I couldn't help but admire how beautiful the buildings were, especially when the streets aren't crammed with people.

Having arrived early, I stopped by Prêt A Manger (they seem to be everywhere in London, and the food was okay) to grab breakfast and a packed sandwich for lunch, before hopping into the red tour big bus which provides live commentaries (Big Bus also offers a blue tour which provides an extended route and pre-recorded commentary in a variety of languages). I started this tour with very little expectations after seeing mixed reviews online, but I have to say I was pleasantly surprised.

I was impressed with our tour guide as the young man showed good knowledge, humour and energy. I came into London knowing how multicultural it was but it was still interesting to hear his story about having no pure english classmate in some of his classes in secondary school. The bus itself took us around many of the key landmarks of London on it's way to my first stop the Tower of London. What surprised me the most was the shape of some of the newer buildings in London, these buildings have gained nicknames like the cheese grater and walkie talkie.

Some of my favourite sights are shown below (click or tap on the picture to open a larger version).

I got off at the Tower of London stop and was glad I pre-booked my ticket online as the ticket office line was already building up (even though I turned up relatively early in the morning). The tower of London was without a doubt the highlight of my short stay in London. Things that made it such a good experience included:


Continuing with the Big Bus Tour

Getting off at the Westminster Pier, I rejoined the Big Bus Tour from the nearest bus stop to finish the rest of the route. Unfortunately the stop that I joined from meant that I had already seen some of the route. The tour guide for this particular bus was an older gentleman who also showed great knowledge and threw in some witty and sarcastic humour. He told an interesting story about applying to join the M16 and being asked to fill in a form that asked whether he belonged to a terrorist organisation (I wonder if anyone's ever selected yes, just for fun).

Having completed the red route, I decided to join the final part of the blue route which provided an extended route in London. Overall the blue route was a big of a disappointment and the lack of a live commentary certainly made a difference in the experience.

I finished off my day by having a quick dinner at McDonalds (Although I didn't plan on eating fast foods on this 3 week trip, the convenience offered by McDonalds was just too tempting, given my 5:30am train to Paris the following morning), and set off to get a refund for my Oyster Card (pre-paid transport card).

One of the things I found out was that there isn't a manned ticket office in all tube stations, and I ended up having to go to the next tube station to get my oyster card refunded. If you've had your card for longer than 48 hours, then there is an automated machine available that can process this refund.