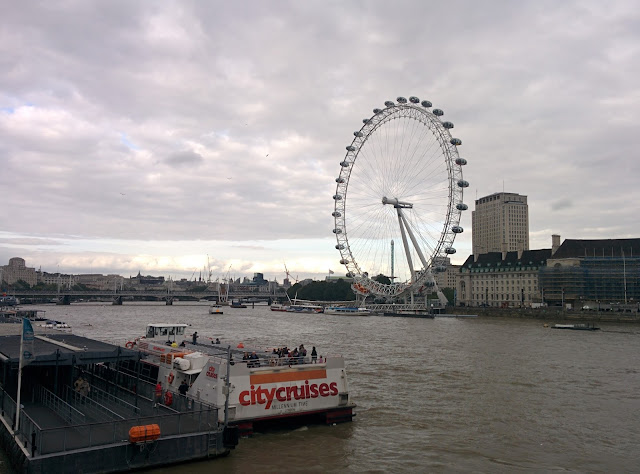 My air new zealand flight touched down in London about 40 minutes early thanks to some tail winds. Unfortunately the joy of gaining some time was short-lived as I found myself in a long line at customs and that gained time was lost by the time I was processed. The decision to bring just a carry-on backpack meant I didn't have to waste any more time at the airport waiting for a checked-in luggage.

Exiting the airport terminal at roughly mid-day, I bought an oyster card at the airport train station and took the tube to my hostel (YHA London Central). Using the tube is certainly a lot cheaper than the heavily advertised heathrow express i.e. in my case 5 GBP vs 26 GBP.

After checking in to my hostel, I dropped off my gear into my room, and walked towards the British Museum where I spent about 90 minutes in the early afternoon looking at various artefacts from different time periods and cultures. The size of this museum certainly deserves a lot more time that I could give it, and would be an excellent activity for anyone fascinated with history and culture. To top this off, cost of entry is  via donation, so this will not put a hole in your pocket.

It was amazing to think how these artefacts managed to survive through these times and are made accessible for everyone for just a donation. Some of my highlights from the British Museum were the mummies in the Egypt room, romans in the Rome room and the samurai in the Japan room. Along the way it was also interesting to see and read about how the different civilisations lived.

With evening fast approaching I wanted to have a quick look at the Westminster area before the sun set, so I walked from the British Museum passing through Trafalgar Square, landmarks from the famous Whitehall Road and ended at the Westminster Bridge to see the Big Ben and London Eye (pictured at the top of this post). It's hard to recall a point in time from my trips to the other cities where so much landmarks being in such close proximity to each other.

It's hard not to admire the architectural beauty of the buildings and landmarks in Whitehall Road, and although I'll pass through this area again when I taken the Big Bus Tour the next day,wandering the streets on foot just has a different feel to it.

I finished off the day by heading to Soho to grab some dinner at Bibimbap Soho, and would have to say their Beef Bool-Go-Gi Rice was very good and at a decent price. It is also interesting to point out that although one of my objectives from this trip was to experience the local cuisine of the country I am visiting, in many ways the local cuisine in London is quite similar to my home country of New Zealand e.g. fish and chips.

....And with that I called it an early night.