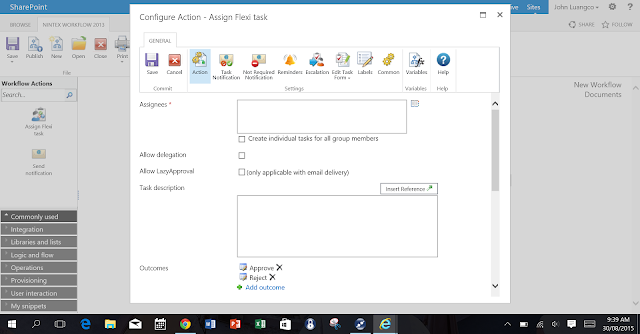 One of the things I've been asking recently is: "what the difference is between the on premise and office 365 version of the assign a task action in Nintex Workflow?

As I often do, I did some googling and was unfortunately unable to find much answers to my question online. So I decided to investigate this myself and write a post to share my observations, and hopefully save some people time looking for the answer.

Before I begin, do note that Nintex are frequently improving the Office 365 version of their workflow platform, and the information shown here could become out of date when they release feature enhancements. As an example, the assign a task action for the Office 365 version recently gained the ability (which was available in the on premise platform) to connect a task action with the Nintex Form product to allow you to customise the task interface users see.

Whilst I will try my best to update this post as new features gets introduced, I would highly recommend keeping an eye out of new features being released from the Nintex Community.

On premise vs Office 365

Comparison of On premise vs Office 365 features

It is definitely great to see the progress Nintex are making in such a short amount of time with bringing feature parity between what was provided in the on premise workflow platform and office 365 equivalent. On the plus side, the changes that have been made to the user interface has really improved the user experience for workflow designers. Although the table above shows that minor gaps still exist between the two SharePoint platforms, from a practical business impact, I see the ability to delegate a task to another user as being the last big feature that I am looking out for.

On a side note, one of the other experiments I have been doing in Office 365, is to change the user assigned to a task to see what would happen. (For those who have not used the Office 365 version, Nintex uses the out of the box task content type which means rights to edit a task form relies on SharePoint permission, on the other hand the on premise version will restrict the ability to edit the task to just the task assignee whilst allowing the admin to delegate the task). During this experiment, I found that changing the user assigned to the task would automatically send an email to the new user of the task even though no delegation feature has yet been implemented in office 365. However unlike the on premise version, the previous user assigned to the task is not notified that their task has been re-assigned to a new user.

Have you used both actions in both SharePoint on premise and Office 365? Have you found additional differences between the platform that I have missed? Please share you experience in the comments below.